'Conservation Area'? With all those oversized parked cars choking up the entire street? Pull the other one...

Ian Jones of Fulham recently wrote an extremely excellent brief letter about the ridiculous opposition to new Boris Bike docking stations in Fulham from local residents who claimed that a docking station located next to the entrance of Hurlingham Park is somehow a bad idea because it would 'clutter' the road more than their SUVs and town-tractors already do...

In fact, some of these residents admit to using the Cycle Hire Scheme themselves, proving this is NIMBYism at its very worst.

These residents are up there with the group of businesses that took Westminster Council to court in 2010 because they erroneously thought having cycle hire bikes nearby would damage their business. In fact, the opposite happened: footfall, and profits, picked up; and Westminster Council won damages. 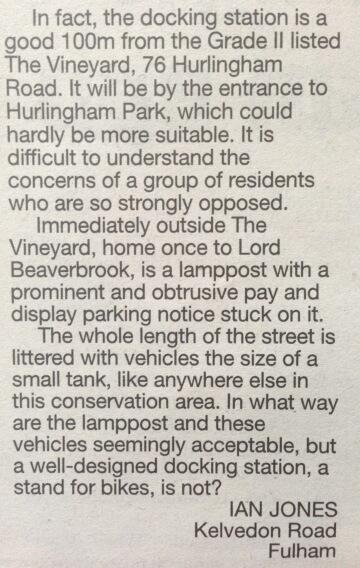 Ian: we've never had the pleasure of meeting, but I really couldn't have put it better myself.

Also of interest is this article on local opposition in Wandsworth from I love Boris Bikes.
Posted by Unknown at 06:58