Polling day (5th May 2016) is coming up very soon, and we all want to make sure we have the most pro-cycling administration possible in City Hall post-Thursday. 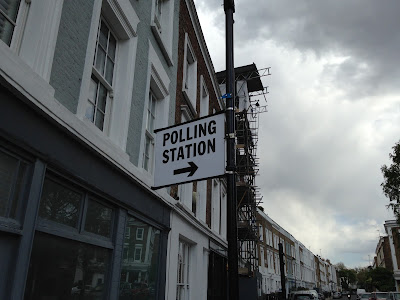 Boris Johnson was a wet-fish for most of his Mayoralty, putting down lines of blue paint which, especially in East London, have led to the needless, tragic, and horrible deaths of many Londoners.

However, in 2012/3 Boris had what can only be described as a Damascene Conversion, and for the last three years he's become a real champion of safe cycling infrastructure; rolling out 38 miles of safe segregated TfL cycle track, most notably along the Embankment. I cycled many of these routes last Sunday, and they're brilliant.

These gains have not been easily won. There was sustained and well-financed opposition from Canary Wharf and the City of London to the Embankment cycle track, as well as trenchant attacks from market traders in Tower Hamlets that mean part of CS2 on Whitechapel Road is still a death trap...

The photo above shows the kind of cycling "infrastructure" we will be left with if our political leader(s) lack(s) the will to push through objectively safe plans, even in the face of local opposition.

Where genuinely top cycling facilities have been built, they're already incredibly busy. Even on a Sunday. Even when they're not even finished yet!


So we need a Mayor who will invest in safe cycling infrastructure, and will have the bravery to make sure that it is built to a high standard so that it isn't a death trap (like the recent photo of the CS2 above). If we want that I believe we need to vote:

And for London Assembly Members, the orange ballot paper:

The reasons behind this are simple. The Greens have consistently backed cycling in the London Assembly for the last 8 years. Assembly Members (AMs) Darren Johnson and Baroness Jenny Jones have not only criticised Boris Johnson's 5 years of folly, when he put blue paint over dangerous, arterial roads. But, perhaps even more impressively, they have had the objectivity to praise Mr Johnson's genuinely brilliant cycling plans of the last 3 years, and the fruits they are already yielding.


Yay! I can guarantee that the next Green AMs will be as passionate as me and @DarrenJohnsonAM about #cycling. https://t.co/60v5XoWzzE
— Jenny Jones (@GreenJennyJones) 3 May 2016

The Green candidate for Mayor, Sian Berry, has similarly consistently championed cycling throughout her career, as well as clean air which I'm sure we all care about. She's been to many cycling and air pollution protests which every other mayoral candidate has ignored.


However, it is unlikely the Greens will win the Mayoralty. The top two candidates will get put into a run-off, and all first preference votes for other candidates reallocated to their second preference vote. This diagram from a recent poll indicates how this would happen:

So, even if one was inclined to vote Green, we still need to be tactical with our second preference: essentially between Labour and Conservative in this two-horse race.

Sadiq Khan, the Labour candidate, hasn't been as bullishly supportive on cycling as Boris Johnson, but he has been significantly better than Zac Goldsmith, his Tory rival.

Sadiq met with Chris Boardman from British Cycling many weeks ago and committed to maintaining TfL's cycling budget. Zac initially fobbed this meeting off, and only met Chris Boardman very recently.


1. More space for cycling on main roads and at junctions
LCC secured a huge investment in cycling at the last election. But London urgently needs more high-quality, protected space on main roads and at junctions – these places force cyclists to mix with heavy or fast moving motor traffic, which can put people off cycling. Our next Mayor must triple the number of miles of protected cycle lanes on London’s roads, to help people of all ages and abilities access the road network by bike.
2. A ‘Mini-Holland’ for every London borough
‘Mini-Holland’ schemes create cycle-friendly town-centres. They encourage people to make local journeys by bike or on foot, help regenerate communities, and bring more customers to local businesses. We’ve already secured new schemes in Waltham Forest, Enfield, and Kingston. Now we want every borough to get its very own Mini-Holland.
3. An end to lorry danger
Lorries are the largest vehicles on our streets and pose the greatest risk to cyclists - their design restricts the driver’s vision. London’s next Mayor must act to end lorry danger. This must include upgrading the Safer Lorry Scheme and using planning powers over major construction projects so that only the safest lorries, with ‘Direct Vision’ cabs and minimal ‘blind spots’, are allowed onto London’s streets.

To be fair to Zac, he has also now signed the same pledges. However, Mr Goldsmith decided to sign the day after Sadiq Khan did, which suggests he was more playing 'catch-up' with his rival, than being genuinely committed to a progressive cycling programme for London.

In terms of air quality - a crucial issues for cyclists that are so over-exposed to pollutants drivers create - Sadiq is also ahead of Zac. Mr Goldsmith won't bring in an 'Ultra Low Emission Zone' (ULEZ) - essentially extra taxing of super-polluting motor vehicles to discourage their use - until 2020 (that's FOUR YEARS!). Sadiq has said he will look at bringing in the ULEZ by 2018, and expand it's scope so it's not only Londoners in Zone 1 that can avoid adult-onset asthma, respiratory failure, and heart disease.

Tactics! If @SadiqKhan isn't your 1st or 2nd preference you're voting for @ZacGoldsmith ie diesel cars till 2020... pic.twitter.com/PlA6cZBllO
— Clean Air in London (@CleanAirLondon) May 2, 2016

Mr Goldsmith also threatened to 'rip up' London's new cycle lanes (which are so self-evidently brilliant) on LBC Radio, as well as to ignore the 6,000 respondents to the Cycle Superhighway 11 consultation which had majority support for proper cycling and walking improvements in Regent's Park and Swiss Cottage.

Since then Zac's recognised than some of the new cycle lanes do work for everyone, particularly the new TfL cycle track in Vauxhall (CS5), and that minority local opposition can stoke unrealistic fears, for example in terms of congestion, that never materialise.

However, it's a case of too-little-too-late, and it's certainly not enough to challenge Sadiq's more consistent and caveat-free support of London's cycling programme.

(and for your first-past-the-post local London Assembly Member you'll have to look at their personal record on cycling, but speaking generally the Labour Assembly Members have been far more pro-cycling than the Conservative ones, so if you don't have time to research then vote Labour.)

Also, if this was confusing, there's a handy explanation of how London voting system works here: https://www.londonelects.org.uk/im-voter/counting-votes