Given that nearly 60% of households in Kensington and Chelsea are car-free, one would expect the council to be prioritising the safety of the majority of their residents who choose not to drive, rather than obstinately preserving road conditions that are straight out of the 1970s and make Kensington and Chelsea one of the worst of London's boroughs for cycling.

However, a recent report in a local newspaper suggests that the Royal Borough council are apparently against plans for a segregated cycle superhighway along Kensington High Street. According to the report, the Council are blocking the proposed Cycle Superhighway 9 on Kensington High Street because they see it as “unnecessary and inappropriate”. It appears the Council are making a big issue about the colour of the cycle lane surface in order to detract from the fact they are also stonewalling on a fully segregated scheme, which TfL have proposed and would require no paint (blue or otherwise) because it would be physically separated from motor traffic.

Despite 'improvement' work in the early 2000s, Kensington High Street remains poorly designed for cyclists, and the large amounts of wasted space in the centre of the road could be far more usefully allocated as space for safe, segregated cycling for those of all ages.

Indeed, The Council’s own report into casualty records before (1990-2000) and after (2003-2005) the 'improvement' scheme reported a worrying increase of 186% in the number of cyclists killed and seriously injured on Kensington High Street. A map of all road incidents involving cyclists between 2005-12 shows very clearly that the design of the road is failing to provide a safe environment for travelling by bike: 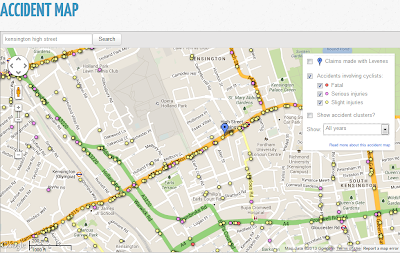 Moreover, the MP for Kensington and Chelsea, Sir Malcolm Rifkind, himself commented last year that “a long-term paucity of proper cycling infrastructure has forced many cyclists onto busy roads, where they are bound to come into conflict with drivers of cars.” The current design of Kensington High Street could not better illustrate this point.

Is the same Council that spends thousands of pounds running 'Bikeminded' (an initiative aimed at encouraging cycling through explicitly non-engineering methods such as free bike training etc.) deliberately ignoring the wise words of their own MP?


If anyone feels like contacting Cllr Timothy Coleridge on this issue to express their support of TfL's desire to segregate Ken High St, his council email is Cllr.Coleridge@rbkc.gov.uk. It might be worth cc-ing in the Leader of the Council, Cllr Nicholas Paget-Brown, too: cllr.paget-brown@rbkc.gov.uk.
Posted by Unknown at 12:58