Westminster Council have recently come up with plans to close Moor St to cycling as part of 'changes' to Cambridge Circus. These plans are so appalling I've publicly posted my response to the consultation below.

I'm writing to respond to the Cambridge Circus consultation as a local resident and worker who regularly cycles.

I think the plans are a significant step backwards for cycling in Westminster and wholeheartedly reject them.

Closing Moor St to cycling is a very bad idea. Moor St is one of the few genuinely quiet and safe streets to cycle on in Westminster (due to the fact it is not a route for motorised through-traffic). People on bikes can already use Old Compton St but choose not to because it is far more dangerous and unpleasant due to rat-running traffic. Why further limit the already limited amount of routes there are for cycling in Westminster, especially when Moor St already contains a rather expensive cycle hire docking station?!

Furthermore, I believe it is perfectly easy to keep Moor St open to cycling. Cyclists and pedestrians currently interact harmoniously at the junction of Moor St and Charing Cross Road, and pedestrians do not need significantly more space here. If you are keen to improve things for pedestrians, areas like Oxford Street or parts of Soho could be much more fruitfully investigated, in my opinion.

It would be a terrible shame in Westminster Council were the only Council in London to be publicly closing cycle routes, especially given the current political, social and economic consensus on the benefits of increasing cycle rates.

I note that the Quietway plans are not finalised yet and I believe it would be incredibly retrograde to start closing cycle routes before you have even begun consulting on building any new ones.

Finally, the additional of 4 new bike parking stands is incredibly paltry given how much demand there is for cycle parking the West End. A scheme like this should be delivering closer to 40-50 new parking stands to cope with increasing demand in the West End and encourage sustainable transport. There's plenty of space for both bike parking and pedestrians and would be interested to see any evidence you might have to the contrary.

I think we should learn from the mistakes that were made with the changes to Haymarket over the last year (i.e. completely failing to design for cycling), rather than repeat them.

Why pinch points are awful for cycling

We came across this photo in the archives from Headington, Oxford which demonstrates exactly why pinch points are such a bad idea for cycling. 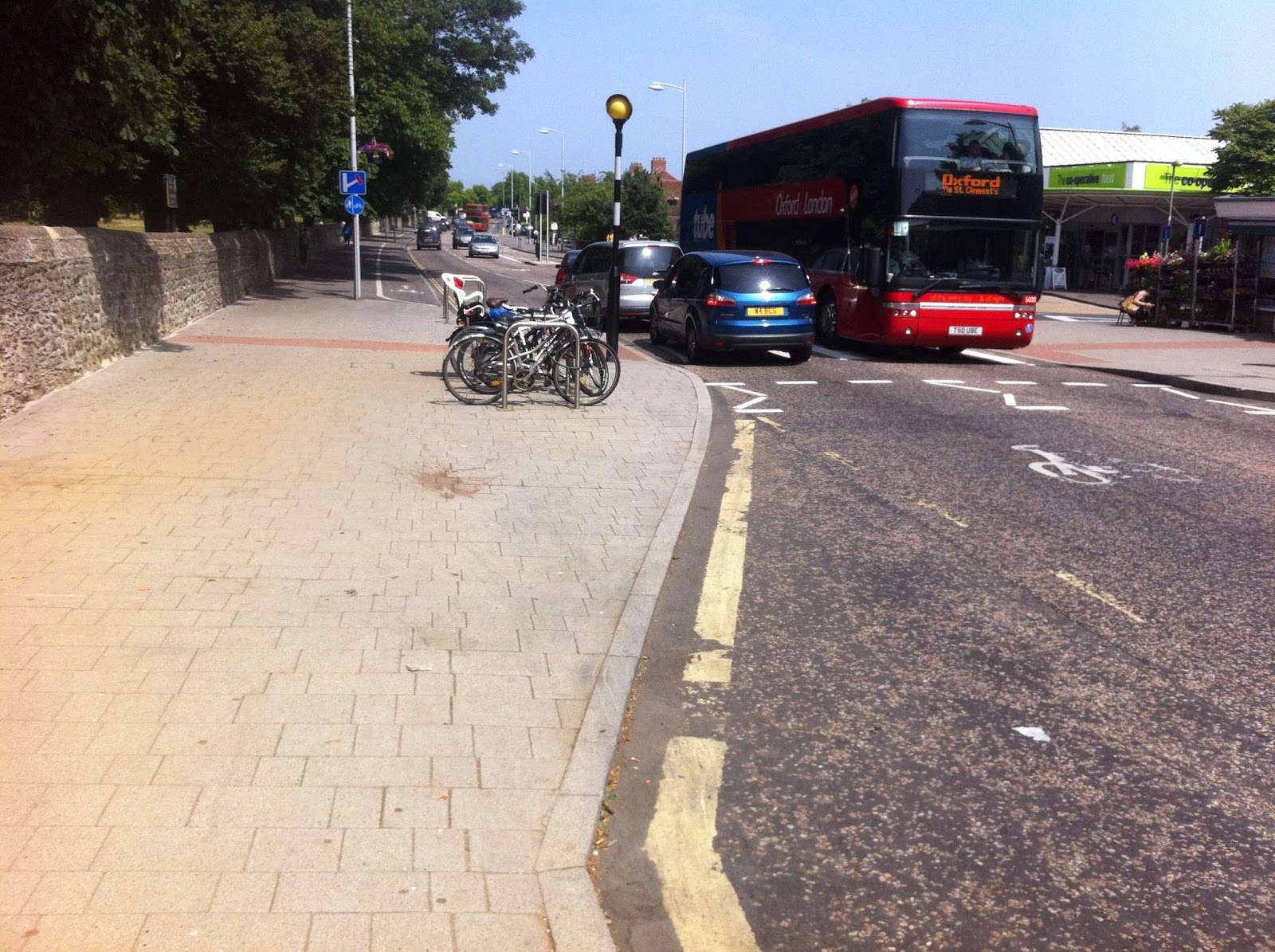 When designing new cycle routes, especially so called 'Quietways', across the UK, I'd urge road planners to resist the urge to install pinch points in order to 'slow' traffic. It makes things much more dangerous and unpleasant for those on bikes. Much better to install a segregated cycle lane and reduce space for motor traffic that way.

In the above photo there could be a segregated bike track where the cycle racks are currently situated, and everyone would be a lot happier!

Got some snaps recently cycling through the Royal Parks that show they value car parking over safe cycling. You'd think, being a Park and all, the people that run them would prefer to have bikes than heavily polluting motor vehicles on their roads, but.... seems otherwise 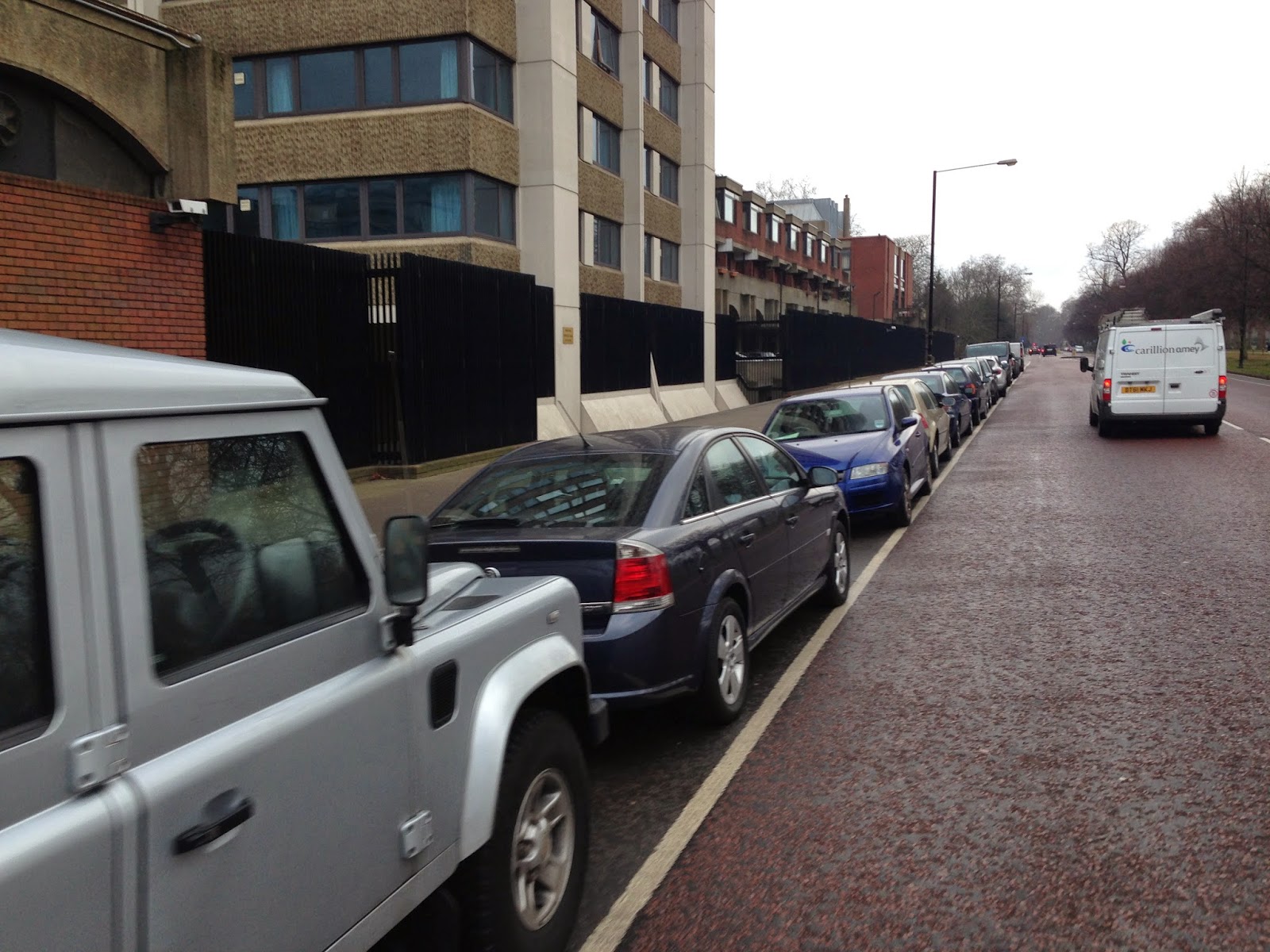 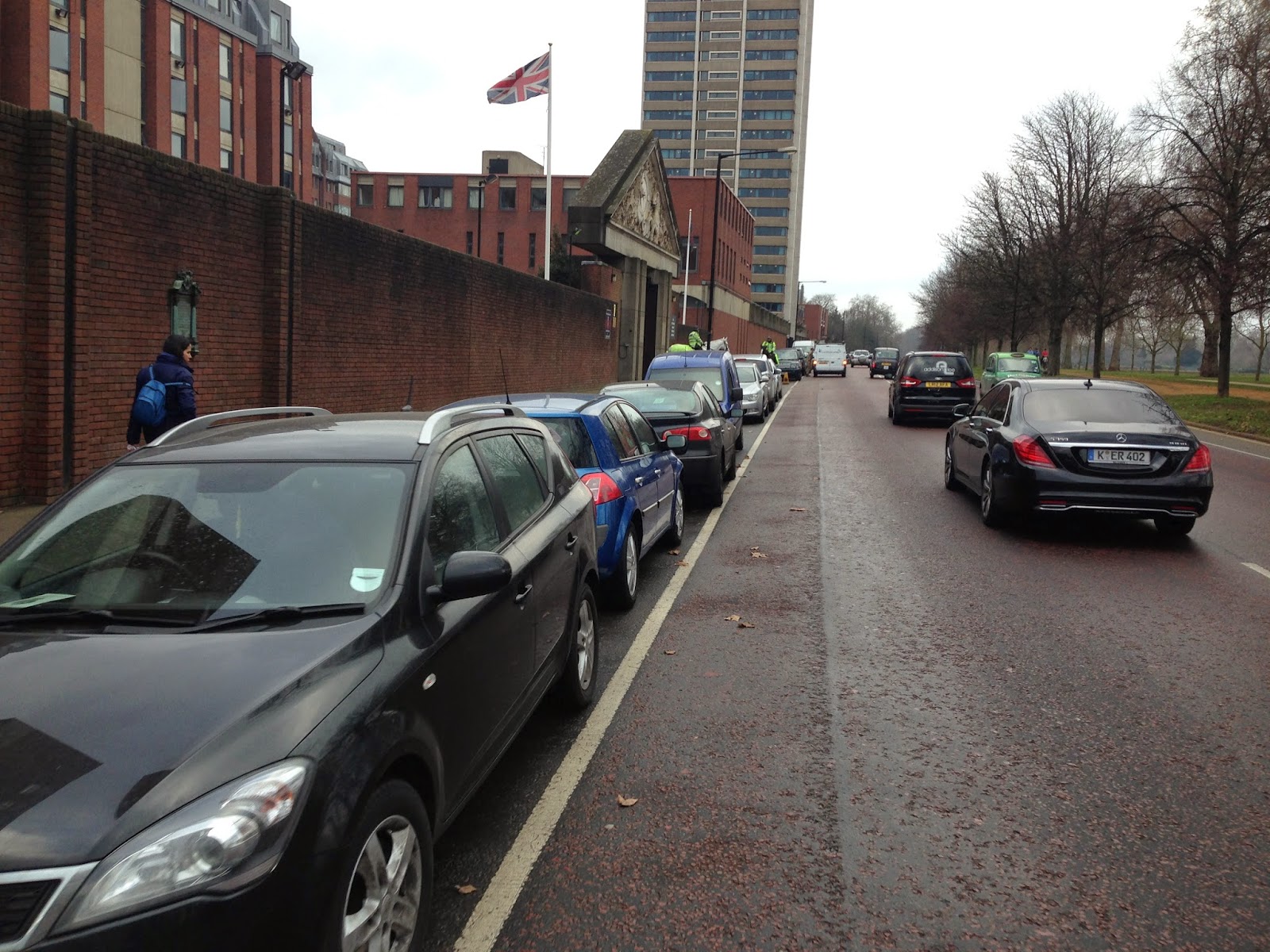 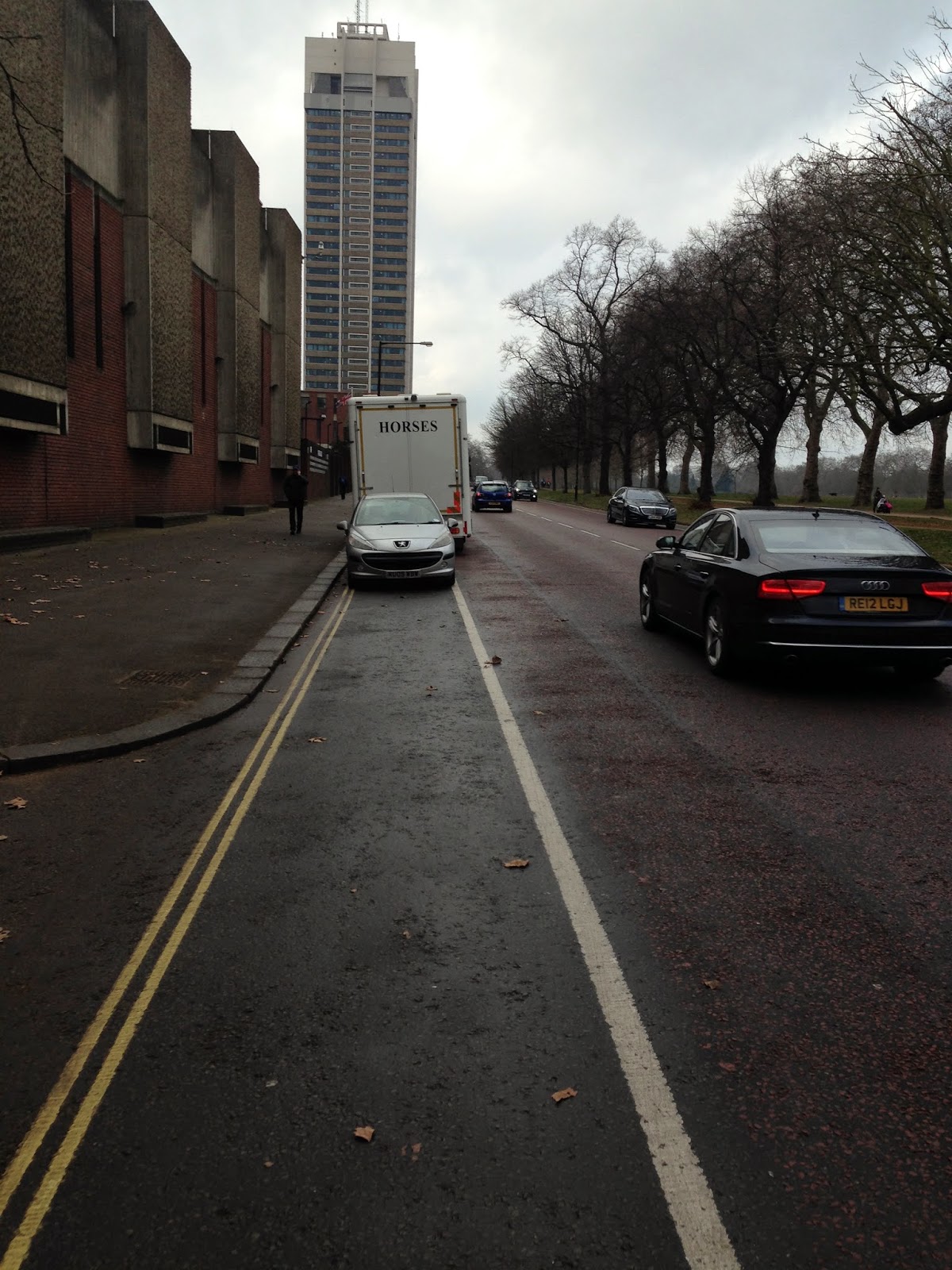 These photos are from South Carriage Drive which is hopefully soon to gain full segregation of bikes and motor traffic as part of TfL's East-West Cycle Superhighway (Crossrail for Bikes)
Posted by Unknown at 15:40 1 comment:

I went to St John's Lane recently and was astonished by how difficult it was to park my bike. It had got to the stage where companies are now claiming bike racks on their land as 'Private Property' so that their employees have somewhere to park their bikes. The local authorities need to sort it out! 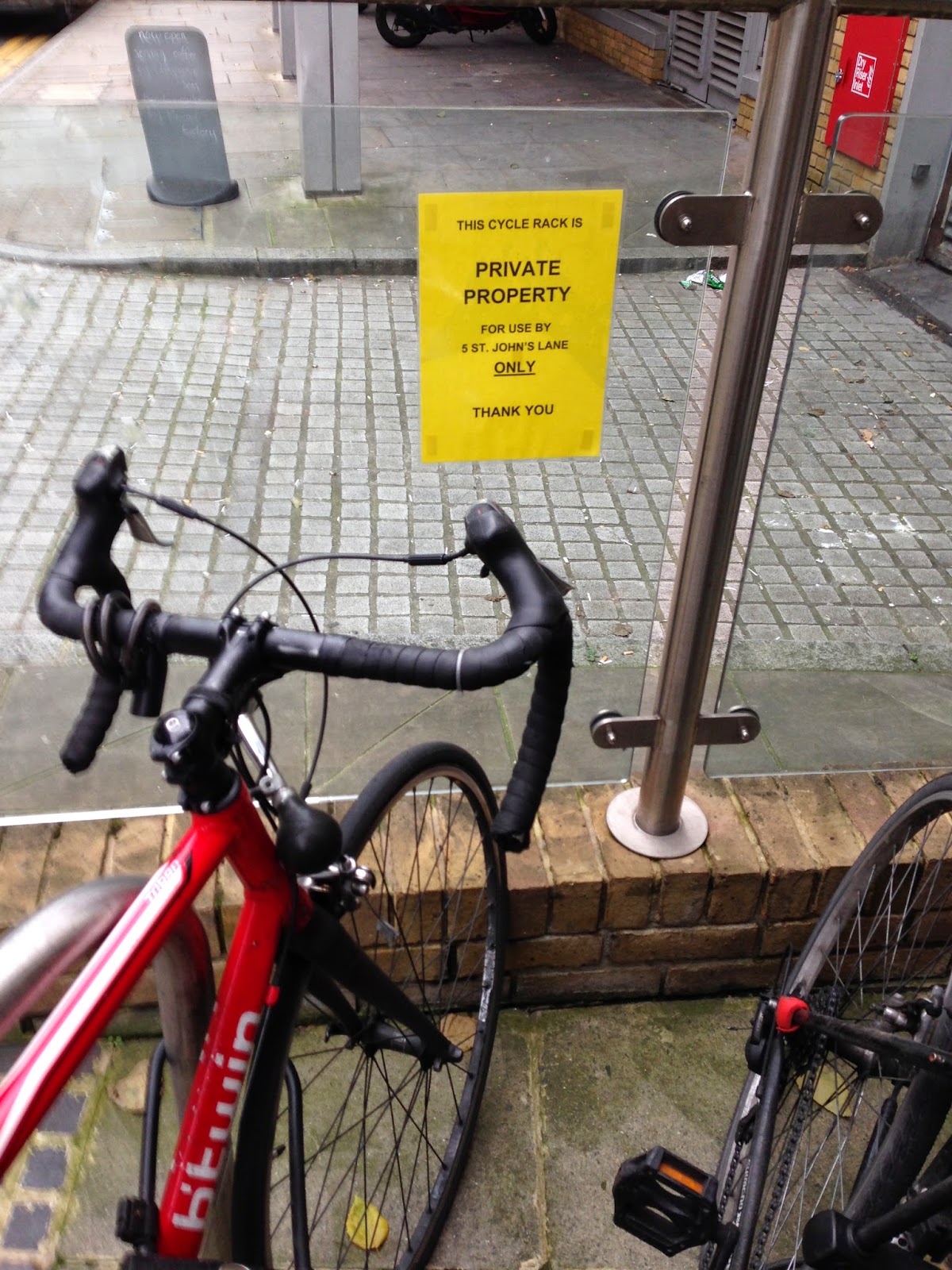 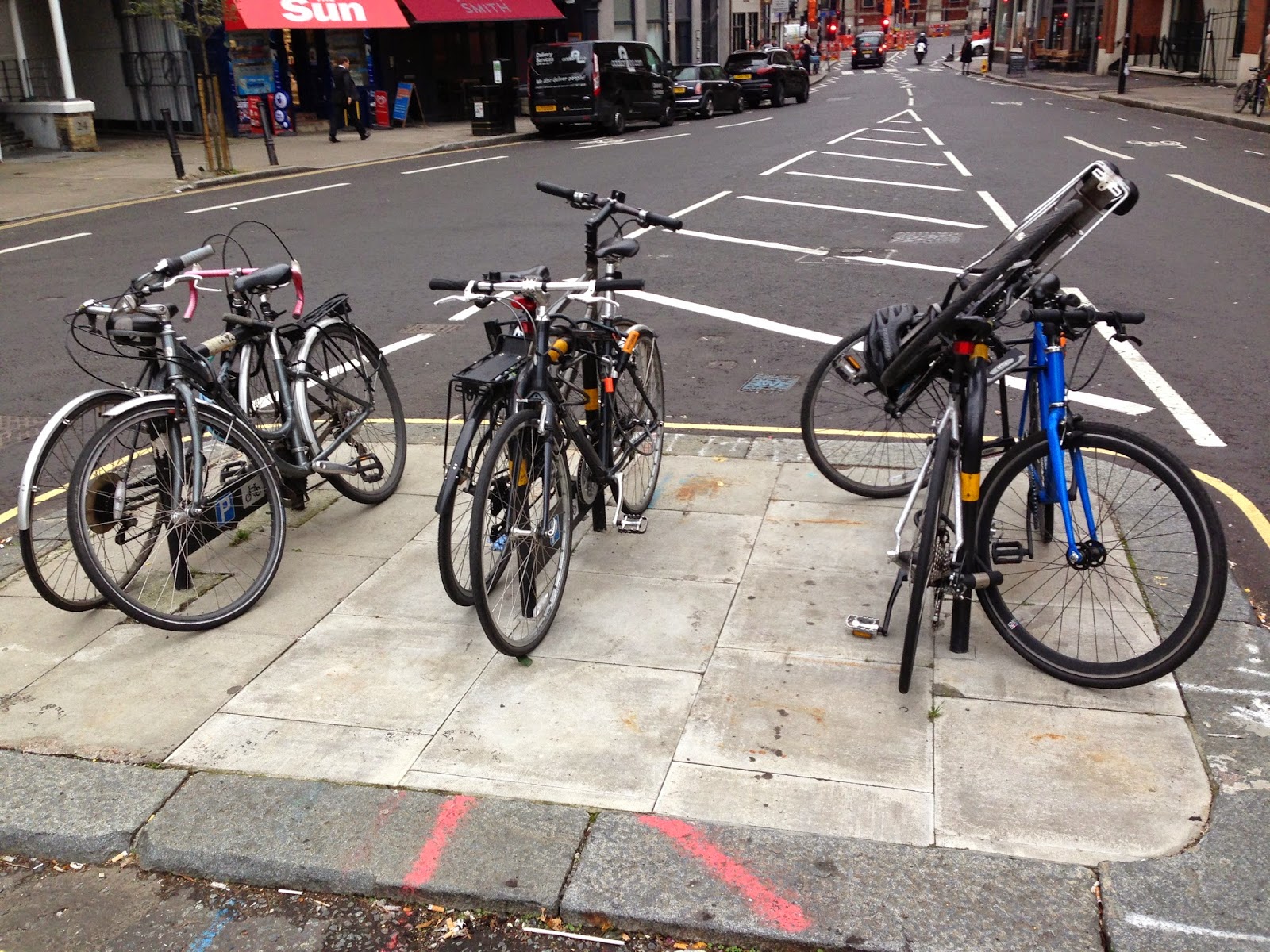 Full Steam Ahead! After months of pressure from Boris Johnson, TfL Board approves Cycle Superhighways Programme

Yesterday the TfL Board formerly approved a massive cycle superhighway programme that will continue into mid-2016. This includes many routes and junction upgrades that have already been consulted on and documented in this blog. The important thing is that these transformational improvements to cycle infrastructure in London will now almost certainly be going ahead despite concerted opposition from Canary Wharf PLC (whose boss likes to commute by limo along the Embankment and is oh-so-angry at the possibility of his journey to work being a few minutes longer) and the Licensed Taxi Drivers Association (who constantly oppose any measures that mean Londoners could make a 2 mile journey for free [on a bike] as opposed to for £20 [in a cab]).

The Licensed Taxi Drivers Association (LTDA) have threatened launching a judicial review against the scheme because they hate the idea of anyone feeling safe enough to cycle around London instead of wasting their time and money on a taxi. However, the legal grounds for such an attack would have to be that there was not 'proper consultation'. Such a position is not credible in the context of a two month long consultation process by TfL in which over 20,000 people responded, and over 80% of respondents were in favour. Therefore we hope the LTDA will see the wisdom in not wasting their precious and time and money in such a hopeless venture. And will stop claiming that people who cycle are the 'ISIS of London'. It's just sick.

And next time, chaps, we'd recommend getting an Uber instead.

A full recording of TfL's board meeting has been archived here if any readers are interested: https://www.london.gov.uk/mayor-assembly/mayor/webcasts
Posted by Unknown at 06:54 No comments: