'Share The Road' campaigns reinforce irrational prejudices, rather than addressing them

Given how gob-smackingly awful the recent, Scottish 'Nice Way Code' campaign is, this latest declaration from Bike Delaware on the other side of the Atlantic seems quite apposite. They have asked their state department of transportation to discontinue the use of “Share the Road” signs (often favoured in the UK by DfT, TfL, and motoring organisations/lobbyists/enthusiasts). Here's their explanation:


As a traffic control device, motorists and cyclists interpret [Share the Road] in different, and sometimes diametrically opposed, ways. Many motorists see it as an admonition to cyclists not to ride in the centre of a travel lane. Many cyclists see it as a message to motorists that, if they are riding in the centre of a travel lane for one reason or another, that faster-moving motorists should cautiously and patiently manoeuvre around them.As a marketing campaign, the phrase’s ambiguity also invites conflicting interpretations.

Many motorists believe that “sharing” means giving up part of something they believe is rightfully theirs while cyclists tend to think of sharing as referring to a commonly owned asset that belongs to them just as much as it does to motorists. This confusion causes motorists and cyclists to trade pointless and time-wasting accusations back and forth.

As a preferable alternative, Bike Delaware have urged their department of transportation to use the “May Use Full Lane” sign, below: 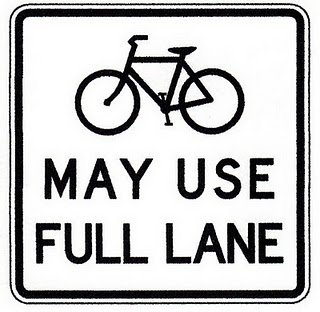 With thanks to Streetsblog New York City for picking this up.
Posted by Unknown at 05:05